Our company was appointed as the publicity agency for the recent 61st California RV Show in Pomona at the Fairplex. The goal was to increase attendance from previous years, which was about 20,000 people. We analyzed what the show had done in the past and made recommendations. This was a challenge because the show runs 10 days.

One of the first items on our list for this PR Client was to generate a lot of news media attention, which was not done in previous RV shows. Another element was to establish a partnership with a charity, we choose the American Diabetes Association (ADA) Orange County. I now wanted the event to have a personality who is an RVer and is a diabetic. This lead me to contact Bret Michaels. Bret is a Type 1 diabetic, and last summer had a successful show called “Rock My RV”. What a perfect match! After contacting Bret Michaels and telling him of our goal to help raise money for the ADA, he immediately wanted to participate. 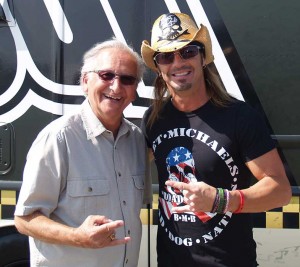 The California RV Show, our PR Client still needed other “attractions” to keep people coming all 10 days of the show. Having unique RVs on display would give the consumers something to see while shopping for their favorite RV to purchase. I contacted three of the Rock My RV owners from the show whose RVs were completely re-built. The three RVs included Tapout, Gypsy RV and the Luxury RV. Now we had a foundation for the publicity.

We first focused on the new RVs having Gayle Anderson from KTLA do interviews with various manufacturers reps from Fleetwood, Winnebago, Airstream, Diablo Toy Haulers to describe their products. We also had interviews arranged with the owners of the Rock My RVs and did an entire segment on Glamping. That’s a new term used to describe “Glamours Camping.” Other media coverage include CBS chief meteorologist Josh Rubenstein who did interviews while reporting the weather during his morning segments. ABC did an interview with the director, Tom Gaither, and we had the Hispanic news media, Que Buena radio and Telemundo TV do an interview with the first Hispanic owned manufacturer of RVs, Pablo Carmona of Genesis Supreme in Perris, California. 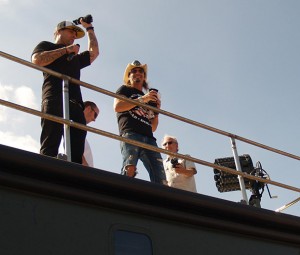 TV news media coverage began 5 days before the show opened. Other news coverage in print and radio also began early and continued throughout the week of the show. Our publicity enhanced all the ad placement resulting in a 39% attendance increase over last year. Having a plan and knowing how and when to implement that plan is critical to getting maximum news media coverage.

If your business or event needs a boost, contact George Carson at 949-477-9400 before your competition does!