It seems that some people still think that only sex, or young women make ads more appealing, what do you think?

I read an article in 101PublicRelations.com that expressed the readers”shock” when he saw an auto ad for a Ford Mustang showing a father and son in a dark parking lot. Then it shows the son driving and pulling out fast, he peels out, then stops and the dad says, “That’s what I’m talking about. This is not a toy! Want to go again?”

The writer was concerned about moms who have had their children be hit by careless drivers, young, old, etc. Yes, I agree with this part that it might be harsh, but it is an ad for a Mustang that was designed to convey power and performance. Later the author says the best way to attract attention would have been to follow the “rules” that were once done as a study by a psychological and marketing group. This group profess that women (young and not too sexy) would have been a better choice. Or at least he is offering the study’s results that attractive mid 20’s women are good choices for ads to gain attention.

You can view the Mustang ad here and make your own decision.

Is it? I believe you can use many different images to get your point across. You don’t need to always use sex in an ad. Even though the study isn’t saying to be sexy, it does still in fact suggest it when it says to use young women. 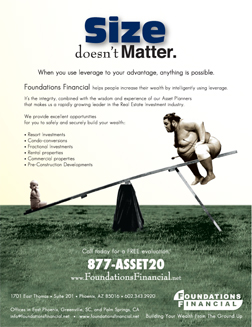 I like humor. It can convey what you want. It can be memorable, it can get people invloved and it is not offending. That is unless you make a offensive remark in your ad campaign. Just like the example shown, we created this ad to attract attention to the clients solution to building one’s wealth. It is memorable, non-offensive and informative.

So again I ask, would you be offended by that Mustang ad, or would you prefer a young woman only in the ad?