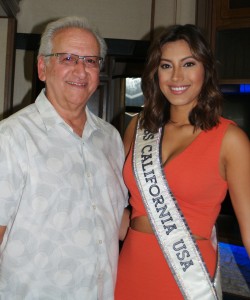 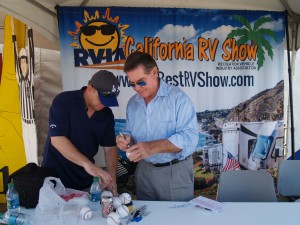 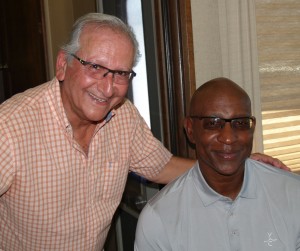 As pr professionals we are given the task of promoting a pr clients event, but then sometimes asked how can we get more people to attend the event from previous years. This year we worked on a local RV Show that is sponsored by the Recreational Vehicle Industry Association (RVIA) at the Fairplex in Pomona, CA. As in the past few years working with this consumer event, we looked at having some sports legends meet and greet visitors. Knowing that many RVers enjoy different sports, and a lot of them will park their RV at the stadiums the night before, we decided to bring some of the greats in Baseball and Football. Our local publicity plan for the 63rd RVIA California RV Show included having the opening weekend (Oct.9) of the 10-day be kicked off with Miss California USA doing the opening. Then on Saturday and Sunday we had Steve Garvey (LA Dodgers), Jim Abbott (Angels) with sports host Roger Lodge, and an NFL Hall Famer, Eric Dickerson draw a large crowd for the first three days. Also, we had lots of media cover the event a couple of days prior to the opening. This week we had other media attend that included a Chinese TV station. The coming weekend we are having another local TV station plus two radio stations (including Vic the Brick) doing live broadcast. And to make the final weekend of the show be successful, we have Rick Harrison (TV reality star on Pawn Stars) do a meet and greet. We did keep the focus on the introduction of the 2016 model RVs from over 45 manufacturers so visitors who attended the show would know what new features they can expect to see at the show. The sports legends gave people another reason to see their favorite athlete while shopping for their new RV.

There are many ways to give some “punch” to an event, and if you understand the audience that will be attending, it is best to tie-in something that will attract them to the show. Publicity is more than sending out press releases, or having a press conference, we look at publicity as a means to communicate a message to a client’s customer. Keeping this in mind should open your creative juices to find that “hook” to give your next event the punch it needs.

If your company is planning an event, give George Carson a call. There’s a good chance you will be pleased to see what he can do to make it more exciting and eventful for your customers. Call him at 949-477-9400

PR Clients always want the best visible coverage from the media. So how do you get this coverage? 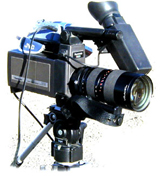 Getting Television and Print Coverage

First you need to plan your publicity campaign. That means you need to establish what is newsworthy, set a target date to make this announcement (press release), be prepared to follow up to all the news media the release was submitted, and have a spokesperson(s) be ready to meet the press. Sounds simple, but this is not an easy task. Knowing the reporters and the media is very critical in getting a story published or aired on broadcast television. PR Clients must rely on their pr agency to direct how and when such a story will be presented. It is the agency’s expertise that will make this happen. Many times pr clients feel that their point of view about their product or service is superior to the competition and cannot understand why “they” are not getting the media or reporters to take notice. For this reason alone, it is important for pr clients to trust the direction, recommendations of the pr agency, if not, it is possible the pr client could create a negative impression to the media and nothing will happen.

We recently had two pr clients that wanted major media coverage. One was for the California RV Show that recently happened at the Fairplex in Pomona on Oct. 11 through 20. The other was Grande Bakery whose 50+ years in business was forced to close due to the city of Santa Ana using eminent domain to take their property for road expansion. We established a strong pr campaign that highlighted the objectives we developed for each pr client. The results were excellent.

The California RV Show had a full week of coverage from KTLA’s Gayle Anderson, plus CBS chief meteorologist Josh Rubenstein, Telemundo TV, various print media and several bloggers writing about the event. You can read more about this publicity campaign in my blog dated October 22.

Grande Bakery required a different type of approach. Knowing this decision by the city was going to impact the lives of the Gallegos family who owned the bakery for over 50 years, and the employees (many who worked there for over 30+ years) and how it was going to have an effect on the community who supported and relied on their goods for over three generations, was our focus. Our timeline was short. We only had three weeks before the city was to take possession of the property so we had to move fast and smart. Our first article appeared in the OC Register with interviews by Tony Gallegos and Ralph Gallegos. This was followed up a few days later with NBC and Telemundo doing interviews. Less than a week later a follow up story with OC Register, NBC TV, plus Telemundo and Excélsior Newspaper created more media attention that generated many calls to the office of Loretta Sanchez. Everyday another media will pickup the article and do their story angle as did OC Weekly’s Gustavo Arellano in today’s online news.

Having a solid campaign that gets your message to your audience is how to get the attention of the media. Knowing when, how and what to do is the pr agency’s responsibility. Give your pr agency the freedom to create the campaign you need and trust their decisions will help you gain the awareness you desire. If your company, event or product needs more visibility, consider a solid publicity campaign. If you need help developing the campaign then give George Carson a call at 949-477-9400. We know how to “make things happen!”