If you haven’t done any web marketing on your web site in the last 8 to 12 months, then you probably think Google’s PageRank is important. Brace yourself folks, it isn’t any longer. Actually, it hasn’t been a tool that Google has relied upon for a year.

A Google Webmaster Trends Analyst stated “We’ve been telling people for a long time that they shouldn’t focus on PageRank so much; many site owners seem to think it’s the most important metric for them to track, which is simply not true. We removed it

because we felt it was silly to tell people not to think about it, but then to show them the data, implying that they should look at it.”

If this doesn’t convenience you to change your pr marketing strategy and re-work your web site, then you may just want to close your eyes and let the competition take away your market share.

If you need to hear this from the top people at Google, then watch this video – it is an interview with Norvig. Still need more? Ok, visit the WebPro News article from Chris Crum.

When you are ready to make things happen in a positive way with your website, contact George Carson at Carson Marketing, Inc. 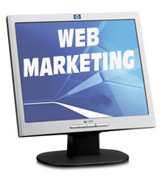 1- Is Your Web Site Google Friendly? Since Google is the grandaddy of search engines, all others will follow this practice. Make sure the site is well designed. Not just with graphics, but well structured. That means all links are working, and pointing the the correct source that relates to the topic of your web page. Make sure it has ease of navigation for users.

2- Optimize from the inside out. More than just adding keywords and phrases. You need to research what are the best keywords for your market, product or service. This changes frequently, so make sure you update this information at least every quarter. Be sure that the title pages make sense. These should be part of your keyword strategy campaign.

These are just a few tips to get an affordable web site marketing campaign together. It will require some solid and serious commitment to maintain a web marketing strategy. Once you have this in place, then you can begin an aggressive pr marketing campaign that includes social networks, blog and podcasting as well as a publicity online press release and article campaign.